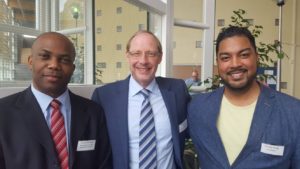 The Netherlands Union Conference Session ended on a positive note on Sunday, 7 May, with laughter and the expression of gratitude towards the team that made the conference possible and towards the delegates who spent four days in session.

With a change in leadership, Pastor Rob de Raad was elected as president together with Pastor Enrico Karg as Executive Secretary. Istrahel Schorea was re-elected as Treasurer.

Pastor De Raad is an experienced leader, having served the church for over thirty years in various functions. He was Secretary for eight years, and has been chair of the North District in recent years. On being elected he stated, “It is a privilege to serve the church, but it is an enormous responsibility as well. It is important that, in the coming years, we seek connection and encourage and strengthen each other in faith.”

Enrico Karg started working for the church more recently, in 2011, where he served as a pastor in the Almere and Amersfoort districts. He agrees that his election is a privilege and feels heartened that such a great number of delegates supported his nomination. “I will do my utmost best to continue the work of my predecessors,” he said, “and I hope many people will support me in prayer.”

Istrahel Schorea started his work as Treasurer in 2012. Continuing in his role he expressed his gratitude at the trust the delegates showed in him. “I am also grateful to my colleagues of the Executive Board these past years. I have faith that this new board will continue the path we have started on, to achieve financial health for our church.”

Welcoming new leadership equally means saying goodbyes. Both Pastor Wim Altink, President, and pastor Bert Nab, Secretary, expressed their gratitude to colleagues and delegates. Pastor Altink has served the church as president for the past ten years. In a speech on Friday, he thanked people for their support and his colleagues of the Executive Board and Committee for all their time and hard work.