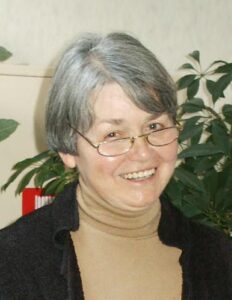 It was with great emotion that we learned of the death of Daniëlle Boumann-Maes on 12 October at the age of 80.

From 1971 to 1995, Daniëlle worked as secretary at the Federation. From 2007 to 2013, she was the general secretary. She was also a member of the Ghent church, which she supported body and soul. Some former colleagues and friends shared their testimony with us:

As student translators/interpreters, Daniëlle and her fiancé Kenneth used to come to the Flemish church in Brussels on Saturdays. That’s where I met them in the early 1960s. About ten years later (1971), when I had just started my pastoral internship, Daniëlle was hired as a multilingual secretary at the Federation. For 24 years, she worked efficiently for the churches, the pastors, the department heads, the treasurer and several presidents (Georges Vandenvelde, Jean Geeroms, Georges Cazaerck, Henri Van Der Veken). One of her tasks was to prepare the monthly ‘preaching role’ for all the churches. This was a complicated task which she carried out faithfully and with perseverance during all these years. It was also during this period that she took under her wing a young Ghanaian refugee, Kwame S., now a doctor in North America. In 1995, she officially suspended her activities to take care of her parents. Years later, she was appointed ‘secretary general’ of the Federation, a sort of vice-president, and thus became the first woman to hold this position in the Belgian-Luxembourg Federation! For my part, I knew and collaborated with Daniëlle during most of my pastorate and presidency. Daniëlle was an outstanding person: available, professional, discreet, caring, sensitive, open-minded, curious and intelligent. A person who enriched the lives of those around her. Thank you Daniëlle. As long as you are in our memories you will remain alive!

Nicole Rosseel (member of the Church of Ghent)

When I started attending the church in Ghent, a year before the announcement of Daniëlle and Kenneth’s marriage, I kept my distance from them, not considering myself to be of the same intellectual level. It was only eight years ago, when my son Piet died, that I got to know Daniëlle’s greatness and love. She was the one who managed to show me tangible and spiritual support during this difficult time. She accompanied me to seminars on grief management. Even years later, she was still available to me. Suddenly I became aware of her struggle and fears. The bond between us was broken because she could no longer react or write and there was no longer a door to get in touch with her. How many times I missed her. And how many times I wanted to be there for her in this difficult period of her life… But I was not allowed to contact her anymore… One comfort: one day I will find my friend!

When I started working at the Federation, Daniëlle welcomed me like a big sister. I enjoyed working with her very much, because she was not only attentive, attentive and available, but also and above all very discreet, something that is lost today and which was a great quality in our work. Daniëlle was always on the lookout for new expressions in French, and the explanations to understand them gave us some good laughs. It is these moments of joy that I want to keep in mind when thinking of Daniëlle. Daniëlle also loved to travel, to discover the world and its different cultures. But when she was at home, she took special care of her cats and gave them a lot of affection, which they returned to her.

In recent years, her illness gradually took away part of her mind and physical faculties until her death, which reminds us how fragile life is. The loss of Daniëlle will leave a void. The Federation and all the members whom she served with dedication and kindness salute her memory and join in conveying to Kenneth, her husband, and their respective families their deepest condolences and affection.