The Executive Committee (Excom) of the General Conference decided on March 19 to postpone the upcoming session to May 2021. During a special meeting with all board members from all over the world via teleconferencimg, a proposal from the administrative committee (AdCom) was discussed. The General Conference Session was originally scheduled for June 25 to July 4, 2020, in Indianapolis, Indiana. In view of the developments surrounding the COVID-19 virus and after consultation with representatives of the World Health Organization (WHO), the Excom voted by 187 votes in favor and 1 vote against the postponement.

The Excom had to consider two different proposals from the Adcom. The first proposal concerned the postponement and downscaling of the session in 2021. The constitution of the General Conference provide the possibility to postpone the session for a maximum of 2 years. Finally, it was decided to continue the session from May 20-25, 2021 at the same location. The session will last 4 to 6 days instead of the current 10 days. Only the delegates and their families will be invited to this session, the technical staff and attendees will be significantly reduced. Many ancillary meetings and exhibitions will also be canceled. In addition to the difficulty of obtaining visas due to the many embassies and borders being closed due to the COVID-19 virus, financial reasons were also given. The Treasurery of the General Conference indicated that a significant decline in tithes may be expected, as many churches must remain closed. The shortened session will also result in department leaders of the 13 divisions being elected by the respective boards instead of during the session, which was already the practice for some divisions. The currently elected officers will remain in office until the session in 2021. 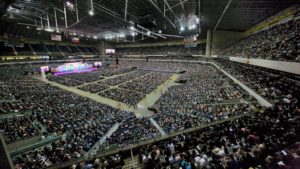 The second proposal that was put on the table concerned future sessions and aims to significantly reduce the financial and logistical footprint of a General Conference session. The proposal implies that the number of delegates will be reduced proportionately, that no more special guests will be invited, the number of days that a session lasts will be shortened, but still including one Sabbath and that no exhibitions, stands and ancillary meetings will be scheduled. The proposal to investigate this was accepted with the same votes.

“I did not anticipate that we would ever be at this point at this time,” declared General Conference president, Ted Wilson, “this is a time for Adventists to spread hope and encouragement. We should be anchors of stability and pillars of hope.”